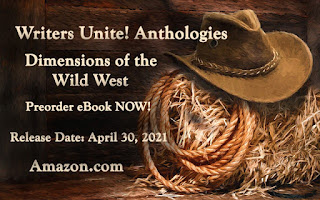 Howdy, folks, Tom here. It's been some bit of time since my last post, and I'm gettin' ready to remedy that. And for my return to the world of blogs, here's info on a two-volume western anthology I'm featured in, along with a whole bunch of other deadeye six-gun authors. If''n you like westerns, you're gonna love these tales of flying bullets in the Old West.
To order from Amazon, follow the links below. 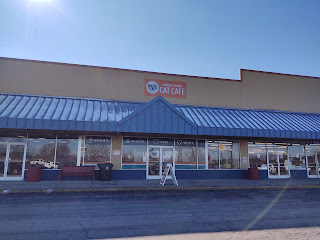 There's a wonderful organization that started up in Georgetown, Kentucky, recently called Central Purrk Cat Cafe. Wen and I heard about it and stopped by today to look at the kitties and have a couple of cups of coffee.

Central Purrk is a warm, inviting place. When you walk in, there are cat-themed paintings on the wall, and a large, glassed-in enclosure where the cats that are waiting for adoption lounge in comfy beds. There was a lady sitting inside the enclosure with the babies, holding and petting one of the babies. All manner of cat ramps are attached to the walls for them to climb and nap on. They have litter boxes, food, everything they need to make them comfortable while they wait for their forever homes. Kitties looked relaxed, and were scattered about, playing or napping.

Oh, yes, and there is a full-service coffee shop, too, where you can grab cup of coffee or hot chocolate (the hot chocolate was delicious) while you watch the babies.

Keep writing, friends, and care for those who need it. 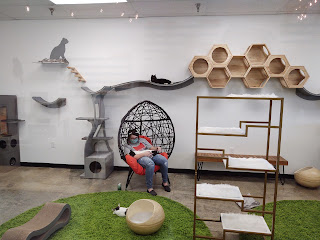 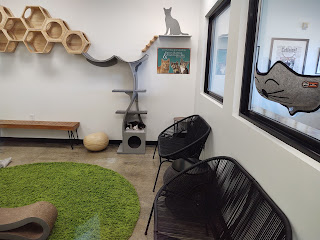 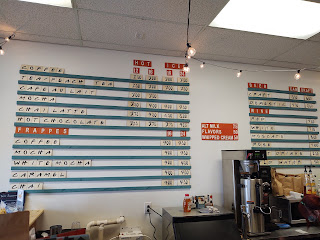 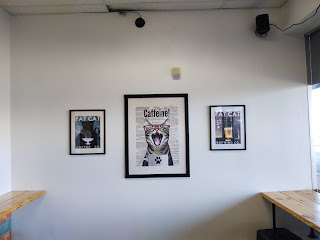 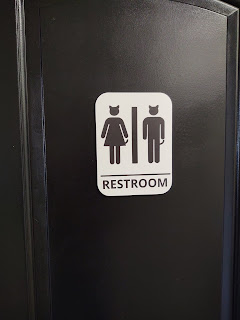 Posted by Tom Zumwalt at 1:00 PM No comments: 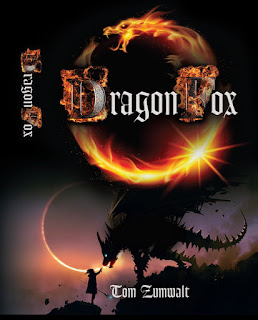 For a tale of fantasy and adventure, follow the young warrior Fox Lockhaven as he struggles to defeat a god and a Titan, and hopefully save all life on Gaia.

"Great world with a believable character you hope will triumph and save Gaia. Loved the language, different creatures, descriptive names for the landscapes, (Forest Black, The Corruption) tie in to mythology. A classic based tale with lots of twists to keep you reading. Loved the ending and want more...please!" -- Amazon Customer

Available at BookLocker and Amazon.

The Old Writer and the Young Writer 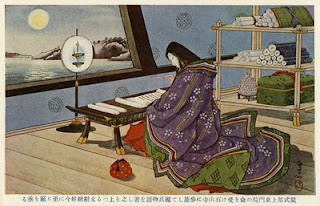 Welcome to the Laboratory. This is where I experiment with new story ideas. This one is the seed of an idea I've kicked around for some time. Comments are sincerely appreciated.

The writer, Justin, walked to where the Old Writer sat in her usual place, on that one bench. Justin's words sat clogged in his throat, just as they had sat clogged his hands when he tried to write.

As he neared the Old Writer, Justin's legs stopped moving. Nothing worked. He froze. Justin prepared himself for turning around, failed once more, heading home.

A calm, yet strong voice said, "Hello, young man. I've noticed you coming in the park recently. Every day you get a little closer to my office." The Old Writer waved her hand, indicating the bench. "Is there something you want?"

"I'm conflicted. I have crazy thoughts. Write every day or not? Today, for example, I haven't written yet. Haven't for the last few days. Too many ideas, and I fear they'll come out in a jumble."

"But should I as a writer be conflicted?"

"Oh, yes. How else can you relate to your characters. Besides, conflict is friction. And friction produces heat. That's the fire that fuels the creative process." The Old Writer, who had no name, smiled warmly. "You have many questions. I may or may not have answers. At the moment there are squirrels in your head, running this way and that, looking for nuts. So, why don't, for the moment, come over here and keep an old lady company." She patted the bench with a mittened hand. "I have brownies."

Justin sighed, relaxed. He walked over and sat beside the Old Writer.

Keep writing, friends. And comment freely. I've no idea where this story is going as yet.

Posted by Tom Zumwalt at 8:15 AM No comments: 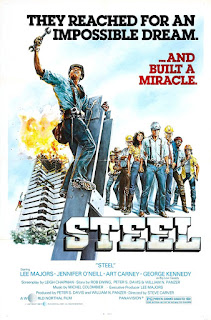 Ha! Yes! I did make it back to continue yesterday's post. Usually, I do forget, or I get distracted by a cat, but I'm back.

Before I get on with my review of Steel, I need to point out a couple of things about Destination Moonbase-Alpha. Two of the masterminds behind Alpha were Gerry and Sylvia Anderson, who first introduced me to the world of science fiction in the early 1960s with their marionette-performed Saturday morning series, Fireball XL5.

Now, on to Steel (1979). At first, I was ready to dismiss the film before I watched it as just another mediocre or bad movie. But considering it now, it was significant in many ways. Sure, it's no Academy Award winner, but it's one of the last of the 1970s action flicks. Just a quick run through the cast is a who's who of '70s actors. Lee (Six Million Dollar Man) Majors, Art Carney, Jennifer O'Neill, George Kennedy. For me, it was a return to all those '70s movies I watched.

And a quick pause here. George Kennedy is one of those actors who I'll always watch in a movie. Whether bad guy (Thunderbolt and Lightfoot), or good guy (Airport, The Blue Knight (TV series)), or anyone in between, he's entertaining to watch.

Let's not forget all the other actors and stunt people that popped up in other flicks. Folks you see on the screen and go, "Oh, yeah, that actor, what's his name." Well, here are just a few of the others: Roger E. Mosley, who seemed to be everywhere when you turned on the tube; Albert Salmi, who did a ton of westerns; and stunt actor Robert Tessier, who I remember from The Longest Yard (1974).

Speaking of stunt actors, a talented stunt actor, A. J. Bakunas, died tragically performing a stunt fall from the building, Kincaid Towers, in Lexington, Kentucky. A. J. had acted in movies such as The Warriors, The Stunt Man, and Hooper.

Almost forgot the storyline: Big Lew (George Kennedy) has nine floors to complete in three weeks, according to the contract. After Lew dies in an accidental fall (performed by A. J. Bakunas), Lew's daughter takes over as supervisor. Unfortunately, the work won't be completed on time, unless... top-notch ramrod Mike Catton (Lee Majors) assembles a Dirty Dozen-style crew composed of the wildest, craziest, beer-drinkingest high steel workers. Can they finish the building in time?

Steel is a grand finale for the 1970s. Full of over-the-top machismo, it has plenty of palm-sweating scenes. Plus, for those of us who live or have lived in Lexington, we're treated to some great high vantage point views of the city. All in all, it's worth a watch.

Well, that's it for now, folks. 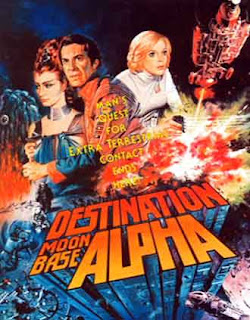 9:22 on a Sunday morning. Wen and I just finished breakfast, had some coffee, watched as much of the news as we could stand, and I did 15 minutes of stairs. Now it's time to write a post while my thoughts are still a little random and raw, before I analyze them.

The 1970s. I'm thinking of the 70s because of one of my new projects. To whittle down the obscene number of DVDs I own, I'm watching what I think may be the worst of the batch, then out they go. Interesting that two of the movies I've watched recently are both from the late 70s.

First up is Destination Moonbase-Alpha, a 1978 made-for-TV movie. This was cobbled together from previous episodes of the TV series Space: 1999, which ran from '75 to '77. Martin Landau and Barbara Bain, veterans of the Mission: Impossible TV series, star in the Moonbase movie, as well as the Space: 1999 series. Storyline for the film is, giving a bit of backstory, the Earth's moon was blown out of Earth orbit due to a nuclear waste explosion. The human colony on the moon had been storing nuke trash on the opposite side, but something went Kablooey!, and they get to take a trip, never to return. Moon River....

Okay, that catches us up. On with the movie's plot. A faster-than-light rescue ship called a super swift lands on Alpha. It contains people from everyone's past, and they promise to return everyone home to Terra Firma. Problem is, they're actually telepathic aliens who survive on radiation, and they want to blow up the nuke trash again so they can power up. Old story line. The aliens, who look really alien in their true form, can project images of people the crew of Alpha once knew on Earth. They do that by tapping into memories. Yeah, yeah, seen it before. 'Course, the Commander of Alpha (Landau) saves the day, but not before we have to endure some REALLY SLOW lunar weightless chase sequences. Out this movie goes.

Next up is Steel (1979), a movie filmed in downtown Lexington, KY. However, as I seem to be long-winded today, I'll continue with that movie on my next post. Don't want to overstay my welcome. 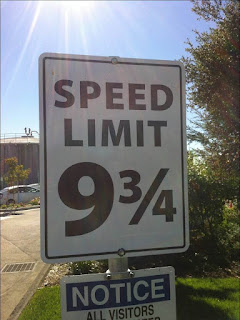 Wen and I ate our lunch in the parking lot of a nearby shopping center today after picking up drive-thru sort of food. It's one of our pandemic activities to escape the house. And, we're sitting there, watching the traffic roll by, and looking at the row of shops across the street. Interesting the things you notice when (1) you're bored, and (2) you do more than look, and observe. That last remark isn't from my own noggin, it's from Sherlock Holmes.

We began noticing the differences in the signs, critiquing them. Of course, our own biases couldn't help but enter in, but we weren't going to go over and tell them what we concluded.

We noticed some signs appealed to us more than others, for a variety of reasons. Some signs we couldn't figure out what the business was actually selling. For example, there was one shop with two large, stylized letter 'Ds' side-by-side. At one time, we think it sold video and computer games, but we couldn't tell from the sign or from the window.

The store immediately to the left of the 2D shop displayed Toy HQ in pink and blue letters. I knew that one to have toys, obviously, mostly new, perhaps some old, but we thought they should have bolder letters and colors, perhaps a vanishing point style.

Another store, the Healthy Foot Center, was readable, and had an outline of a foot, so we knew it had something to do with taking care of your feet, but what, exactly did they sell? Arch supports? Foot massages? New age techniques? Don't know.

Then there was the vine & branch. Did they sell wine? Plants?

I was reminded of an article I read years ago about the changes in business names. The author lamented the days of signs that accurately described what went on within the store. IBM was International Business Names; KFC was Kentucky Fried Chicken; TI was Texas Instruments. I understand that in the days of cost-cutting, a shorter business name is more economical, but it can be confusing to consumers.

Ah, well, enough grousing. Just mental stuff I had to get out.

Find Stuff in My Blog